Hobnailed boots (also known as “tackety boots” in Scotland) are footwear with a regular pattern of hobnails (nails put into the soles of the boots). They generally have an iron horseshoe-shaped inlay called a heel iron and an iron toe piece to reinforce the heel. Steel toecaps are also possible. The hobnails protrude from beneath the sole and grip soft or rocky terrain and snow, but they slide on smooth, hard surfaces.

What Is The Origin And History Behind Hobnail Boots?

Leather was the primary material used to make these early climbing boots. They were heavy, and climbers had to add weight by hammering nails, known as hobnails, into the soles to make them appropriate for alpinism.

The Roman empire was enormous, including much of what is now known as Europe. Part of their lengthy run of success and expansion has its attribute to their wise footwear choices. Hobnail footwear, or boots fastened together with metal tacks, was tough and resilient, allowing troops to replace their shoes as they wore out.

The Etruscans devised this groundbreaking footwear, which the Romans later adopted and refined. Many historians believe that Romans could travel for extended periods on foot because of these boots, which assisted their expansion from the Mediterranean to the northern sections of the continent.

Footwear known as “Caligae” was another famous boot-like shoe during the reign of the Romans. This hobnail type of thick-soled, robust boots had an open-top that looked a lot like a gladiator sandal. Roman cavalry and foot infantry wore these boots, and they were ideal for in the Mediterranean’s hot and humid weather.

These versatile boots eventually got marketed to everyone, not only soldiers and members of the Roman military. Caligae got ultimately put on sale to ordinary mothers, men, and children living within the Roman republic, according to documents dating from 301 AD.

The affluent Romans finally added a little flair to their footwear. When armies of men returned to Rome after a successful fight, legend has it that they replaced their copper hobnails with ones fashioned of gold, silver, or other costly, shiny metals. Senators and Emperors wore boots, but the footwear worn by the governing classes was a little more striking than that worn by ordinary citizens or troops. Upper-class men were known for wearing knee-length boots of black or white leather.

Are Hobnail Boots Being Manufactured Today?

In 2011 Grenson, the Northampton shoemaker, paired up with Rag & Bone, an English duo with a New York-based label, for another collaborative shoe. This partnership culminated in a boot fashioned using Grenson-sourced hobnails hand-nailed in the boot. There you have it; hobnail boots are still a fad that doesn’t seem to fade anytime soon.

Wesco Timber boots are explicitly meant to meet the demands of forestry workers, and it was a big success. It is the most famous boot in the woodworking business.

Other features of this boot include:

1. The upper side of the boot is full-grain leather.

2. The white stitching on the boot is thick for added strength.

3. Has studs and eyelets made of solid brass

4. The gusset made entirely of leather

5. It has a counter pocket made with whole leather

6. The shoe boasts of a ‘stytherm’ counter that has permanent production.

9. Shank made of leather

10. The insole is made of original leather and is sweat-resistant.

This shoe is a waterproof bootie with a 10″ oil-tanned leather upper for support, and a calk sole with a spring heel for excellent grip. A steel shank and an additionally cushioned footbed provide added comfort and support for all-day usage. The boot has a replaceable calk bottom that provides an excellent grip on the durable composition soles. This boots design offers comfort, durability, and value in one package. Triple-stitched top, replaceable spring-heel calk sole, and a double layer of 5.5-6 oz leather in the calf area. A waterproof ‘sympatec’ bootie will keep you dry in most situations. A Cambrelle inner lining provides comfort, and every stride is cushioned with a detachable cushion insole. This boots’ finishing is solid brass hardware and a sturdy heel counter. 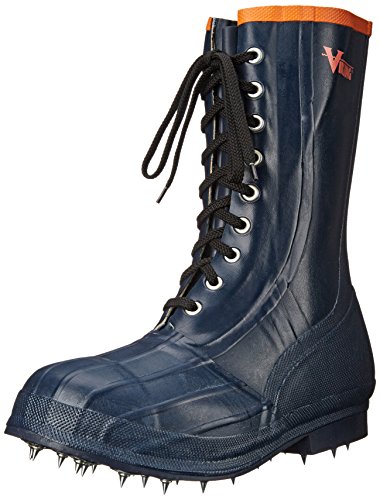 The Viking spiked forester boot is the top range for lumber and wood operations. It has a polyester liner manufactured of styrene-butadiene rubber mixed with natural rubber. The heel and instep of these boots are strengthened. The boot features widely in forestry, surveying, and roofing. Viking boots are distinct from other boots. The maker emphasizes safety as a concept rather than a guideline, ensuring that every boot they create meets or surpasses industry requirements while also emphasizing comfort and wellness for the wearer.  They collaborate with miners, foresters, fishers, and firefighters to learn about their comfort concerns and bring their solutions to market in these boots. From the arch, the shaft is roughly 11″ long.

The Chokerman is a lighter-weight boot that offers optimal comfort and flexibility. The upper is 10″ black buffalo leather with Neoprene screw caulk and a polyurethane cushion spring heel. The cushioned spring heel wedge that helps tame even the rockiest terrain will assist your back and knees. The double ribbed steel shank is zinc coated to retain arch support while reducing torsional stiffness.

3. Seams that are completely snag-free

4. Toes with a lot of resistance

5. stud hooks and eyelets made of solid brass

6. Nine insoles made of iron leather

7. Counters made of leather

8. Eight midsoles made of iron leather

9. Outsoles made of top neoprene with Viberg receptacles and screw-in caulks