“It is not a concert you are watching; it is a fashion show,” Freddie Mercury (actual name Farrokh Bulsara) famously quipped to the audience at a Queen show. He was fully aware that some of the clothes were outrageous, but he hoped the audience didn’t miss the joke. The main conclusion is that Mercury never pretended to be someone he wasn’t; he was always himself.

From sparkly jumpsuits and ballerina shoes to jeans and sneakers, short skirts, and high-heeled boots, Freddie Mercury’s dress style evolved throughout time. Mercury’s appearance always shocked people, whether in a theatrical costume or a daily suit. It’s simply another one of those fascinating Freddie Mercury facts: several of the singer’s performance outfits, including his brilliant yellow military jacket, have become indelible parts of his legacy. This article is all about the yellow jacket.

The History Behind The Freddie Mercury Yellow Jacket

Freddie Mercury brought the debut of his yellow leather jacket in 1986 at Wembley stadium. This debut was happening a year after Live Aid solidified Queen’s status as rock royalty, and Freddie Mercury returned to the stage for his last tour.

He struck a more straightlaced figure in a military-style jacket, although one with many gold buckles and in a bright yellow color, after spending most of the 1970s in a dazzling assortment of crazy, low-cut leotards.

During Queen’s “Magic” tour, the jacket made its premiere, a two-month journey through Europe that saw the band perform 26 gigs from Stockholm, Sweden, to England. It was Queen’s most successful tour and Mercury’s final one.

Diana Moseley, his friend, and fashion designer, designed three military-style cropped jackets, including his renowned yellow jacket. The style featured gold buckles, eyelets, and Spanish opera costumes inspired trim. Mercury wore the jacket with gold-embellished white pants with a red line down each leg. Though yellow was supposed to be one of the singer’s favorite colors, the color scheme was his way of giving tribute and paying homage to the Spanish flag.

Freddie Mercury loved this leather yellow jacket, and he donned it in the “Miracle” music video.

Shortly after the music tour in 1986, Freddie succumbed to AIDS-related complications on 24th November 1991.

What Happened To The Yellow Jacket After Freddie’s Death?

Freddie’s family, Parsis, were staunch followers of the Zoroastrianism ways, thus destroying most of his belongings. Because fire and water are significant symbols in the faith, and most of Mercury’s belongings were set on fire, genuine Mercury memorabilia is scarce and precious. Mercury’s stamp collection, which he was given by his father when he was a youngster and gradually added to over the years, is one of the artifacts that has survived. Mercury’s yellow jacket has also survived since grapevine has it that he gave it to Jim Hutton, his lifelong lover, before his death. The yellow jacket was auctioned in 2004 at Bonhams and sold for a little more than $36,000. On the other hand, the pair of trousers he wore with it went for around $27,000. No public records show who bought the products or if the same person purchased them. 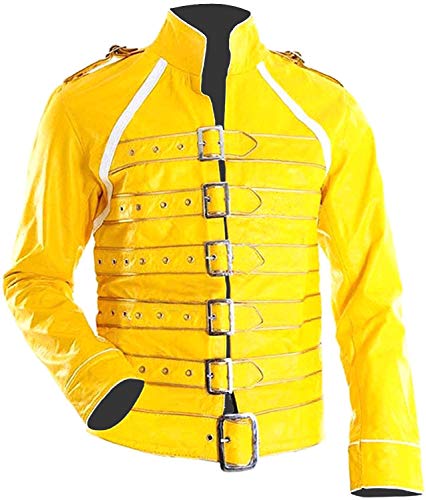 This jacket is an imported genuine leather with a belted closure replica. It has high-quality stitching and brags of adjustable shoulder epaulets placed on the shoulders of this cosplay costume, giving it a refined and attractive appearance at first glance., open hem cuffs, and an erect collar. Wearing this one-of-a-kind jacket draws all the attention to you without exerting any effort.

This yellow-colored costume jacket is a real fashionable cosplay option. The material used to create this beauty is natural leather or imitation leather, depending on the buyer’s preference and comfort level. 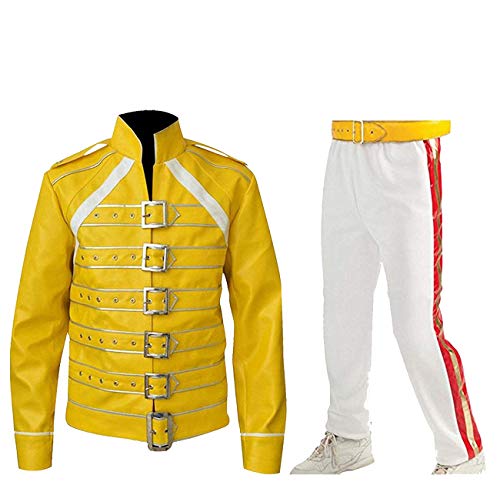 Named after the last concert that Freddie mercury held, this jacket comes with replica pants of what Freddie wore. This yellow belted jacket and pants make a great cosplay outfit. The imitation leather material used to make the Wembley Singer Cosplay is high-quality. The yellow motorcycle jacket has a one-of-a-kind design that is hard to come by; there are gorgeous belts on the front that are considered one of the most spectacular closures of all time. It includes a viscose inner lining, one of the comfiest and long-lasting lining options. At first impression, the looped costume jacket features an upright round collar and adjustable shoulder epaulets, giving it a stylish and contemporary appeal.

The Rockstars company took the game a notch higher and created a replica costume for the kids. This creation plays a vital role in educating the children on pop culture and its founders. Rock stars are legendary for creating the most infamous fashion statements, which their fans seek after.

Mercury was one of the few celebrities whose exceptional admirers still remember dress sense. In this costume, they provide an enthralling and charming outfit that is deserving of praise in your child’s fashion wardrobe. It’s a gorgeous ensemble made of synthetic leather with large belt buckles on the front fastening.

The jacket has premium stitching providing the mastery of tailoring for a long-lasting look. This jacket completes the child’s dashing appearances at musical performances and fashion events with a trendy upright collar, white stripes running diagonally from the collar bone area to the armpit, and shoulder tabs.

Freddie Mercury, the frontman for Queen, had several famous looks. He is noted for his excellent taste and staying true to himself when it comes to his sartorial decisions, in addition to his powerful voice. Years later, his legacy still lives on through the replica Yellow Jackets manufactured to pay homage to him.